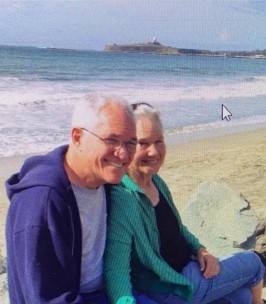 Share this tribute
Memorial Candles Lit for William | SEE ALL
Light a Candle
"We are honored to provide this Book of Memories to the family."
— Colonial Rose Chapel & Cremation
"I'm at a loss for words to say. My grandfather was many things. No family is ever perfect but he was an extremely important part of thi..."
— Nicolas Locksley
"Bill was a good and great teacher .he taught be anger management 🥺😭he will be misssied"
— Priscilla Brena
Funeral Details Memory Wall Photos & Videos Send Flowers

Print
William Milton Cowan passed away in his home in Stockton, CA, on July 20 2022 at the age of 80. Bill was born in San Francisco, CA, December 5, 1941 to Alice Pope Cowan and William Livingston Cowan. His father went off to WW2 with the US Navy just days after Bill was born. You can find his popular “war baby” picture in a 1942 newspaper. He and his brothers, Ron and Paul, grew up in California in Turlock, Exchequer, and Fresno. He shared childhood stories of exploration and adventure like that of Huck Finn and Tom Sawyer. Shortly after graduating from Fresno High School, Bill served in the Air Force where he was stationed in Japan and Utah.

In June 1968, Bill was singing in the choir at Faith Chapel in Fresno when he met Margaret Alicia Miller. They were married 4 months later and would be celebrating their 54th wedding anniversary 10/19/22. Bill lovingly referred to her as “My Alicia,” he would tell you that he ‘married up’ and that his love for his wife was second only to God. This affection and commitment was evident to everyone who knew them. Together they lived a life full of ministry, always serving in churches and hosting people in their home. Bill and Margaret lived in the Bay area of California, especially enjoying their years in Half Moon Bay. In 1970, they gave birth to David Alexander. David lived for 25 days and was buried at Chapel of the Chimes in Hayward, CA. Not long after, they had two daughters, Alicia and Arleighn. They were blessed with their son through marriage, Patrick Eskew, in 1992. Bill became a Papa when grandchildren were added in 1996 (Jacob Alexander), 1998 (Emily Rebekah), 2004 (Phoebe Monet), and 2009 (Stori Ann). In 1997, it was Bill and Margaret’s joy to meet newborn Zakiah Joanna whom they officially adopted in 2003.

Bill has attended Bible college, served as a painting contractor, a teaching pastor, a pastoral counselor, a missionary, and a chaplain. A huge part of Bill’s life has revolved around missions. He has travelled to remote villages in Africa, Indonesia, and the Philippines. His stories of God’s provision and protection on those trips pale only compared to the stories of God’s supernatural transformation and healing. In the last 7 years of his life, he would tell you he found ‘his niche’ serving as a counselor at the Gospel Center Rescue Mission in Stockton. There, he grew to love the local men and women who came to hear him speak at chapel, sat in his anger management or boundaries classes, shared their stories in his office, and courageously worked through their programs to graduate into transformed lives.

Bill has been deeply loved as husband, Daddy, Papa, brother, uncle, pastor, and good friend. His laughter and wisdom will be missed every day. His lessons echo in the hearts of those who listened to him. He always had a quick-witted joke ready. His genuine smile and kind eyes made others feel at ease to bring their burdens. He listened prayerfully and spoke with wisdom over anyone who wanted to hear the truth of God’s word spoken over them. He would want everyone remembering him to remember Jesus first. He would point you to Jesus and remind you that you are deeply loved by your creator and that love is unshakable.

Bill’s last 2 years were spent writing hundreds of devotions which are in the process of being published.
Due to allergies, the family has asked not to receive flowers, but rather, all donations will go toward caring for his beautiful wife, Margaret Alicia Miller Cowan (to make a donation directly: use Zelle, (209) 242-1963 or MamaAlicia63@gmail.com). Bill’s preferred charity is the Gospel Center Rescue Mission in Stockton, CA.

To send flowers to the family of William Milton Cowan, please visit our Heartfelt Sympathies Store.

We encourage you to share any memorable photos or stories about William. All tributes placed on and purchased through this memorial website will remain on in perpetuity for future generations.

I'm at a loss for words to say. My grandfather was many things. No family is ever perfect but he was an extremely important part of this one. As his grandson, I felt alone and separated from him for a good bit of my life. At the end of it all, despite our differences I had never felt closer. He was resigned and my only regret is not pushing him to tell me more. I wanted to know him better, more than just our family connection, but it was hard to find a moment where he'd open up to me. Despite feeling like he never let us into his world I now realize we were his world. I am happy I didn't see him on his death bed and I give my love to God to pass along the message that I never loved him any less. I will remember him as my loving father figure. My grandmother told me that he believed our prayers stayed with him surpassing death. If that's true, I don't regret a single moment I spent praying for him. No matter how hard things got between my family and I, I had nothing but good intentions for him in my prayers. He will know I never loved him any less.

I miss you dad. I'm sorry I didn't get a chance to say a proper goodbye. I love you.
Nicolas Locksley - Tuesday August 02, 2022 via Memorial Candle
Share This:

Bill was a good and great teacher .he taught be anger management 🥺😭he will be misssied
Priscilla Brena - Thursday July 28, 2022 via Memorial Candle
Share This:
A
Bill you were an inspiration to me. You taught me humility.Rest in Eternal Peace my friend. My prayers with Bill's family and the entire Quail Lakes Baptist Family. Jeff from Kenya.
angiyojef@yahoo.com - Monday July 25, 2022 via Condolence Message
Share This:
1
Page 1 of 1
Share
×