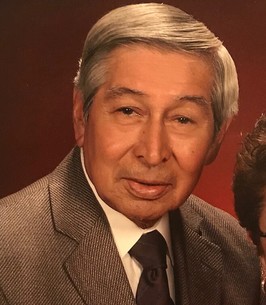 Print
Ruben Mark Rodriguez of Stockton, California, passed away peacefully on Thursday June 11, 2020 at Kaiser Hospital in Modesto. He was lovingly surrounded by his wife and children. He was 87 years old. Mr. Rodriguez is survived by his wife of 55 years, Dolores A. Valverde Rodriguez and his children, Stephanie A. Ortiz-Fetherlin, Mark A. Ortiz, and Georgina A. Broberg (Mike) of Stockton, Eric E. Rodriguez-October (Manuel Nunez) of Los Angeles, and Matthew R. Rodriguez of San Francisco. Ruben is also survived by his brothers Ramon Rodriguez and Simon Rodriguez. He was preceded in death by his parents, Simon and Gregoria (Garcia) Rodriguez and his siblings Alonzo Rodriguez, Sam Rodriguez, Olga Saiki and Esther Rodriguez. Mr. Rodriguez also leaves behind 11 grandchildren, 17 great grandchildren, and many nieces and nephews.
Ruben was born in Crystal City, Texas on November 15,1932 and moved to Stockton around the age of 6. He graduated from Edison High School and from Stockton College. After enlisting in the Army in 1952, Ruben proudly served for 3 years in the Army Band, playing the saxophone. He served a total of 8 years in the military; 3 years active, 5 years on reserve.
Mr. Rodriguez spent many years living in his city by the bay, San Francisco, finally moving back to Stockton to marry Dolores on December 31, 1965, for “the tax break”, as they always used to joke about! Ruben worked for Dunlap Electronics in Stockton and Inland Electronics in Modesto in commercial sales. After his retirement, Mr. Rodriguez enjoyed doing freelance work at Canepa’s Carwash for his friend Remo Canepa and Remo’s son Paul. Drawing on his knowledge and enjoyment of electronics, he installed and maintained the sound and security systems at both Canepa’s Carwash locations.
Ruben, affectionately known as Papa to his children and grandchildren, had very specific interests. He loved to tend to his garden but was particularly proud of his orange tree! He could be found in his favorite chair with his Dr. Pepper watching his beloved ice skating or listening to his music. He introduced his children to the joys of jazz, classical music, and musicals. He always had music playing in the background of our lives. Everyone who knew Ruben will remember his absolute love and loyal devotion to his San Francisco Giants. The epitome of a die-hard fan, he passed that legacy on to his children and their children.
Ruben was a man of few words, but absolute strength, silent but strong. He will be greatly missed. Funeral arrangements provided by Colonial Rose Chapel and interment will take place at Cherokee Memorial Park in Lodi. Burial will be private due to Covid-19 restrictions.

To send flowers to the family of Ruben Mark Rodriguez, please visit our Heartfelt Sympathies Store.

We encourage you to share any memorable photos or stories about Ruben. All tributes placed on and purchased through this memorial website will remain on in perpetuity for future generations.

We are thinking of you. Sent with love and remembrance,
The Oliva Family. - Wednesday July 08, 2020 via Heartfelt Sympathies
Share This:

Our thoughts and prayers are with you. In honor of a great man who will live in our hearts and memories for years to come, with all our love.
Nicole, Larry, Bella and Benjamin Oliva-Mandras - Sunday July 05, 2020 via Heartfelt Sympathies
Share This:

I love you, papa, and miss your grouchy, mischievous face.
GeenieWeenie - Friday June 19, 2020 via Memorial Candle
Share This:

We love and miss you, Papa
The Oregon Pik Kiks - Friday June 19, 2020 via Memorial Candle
Share This: