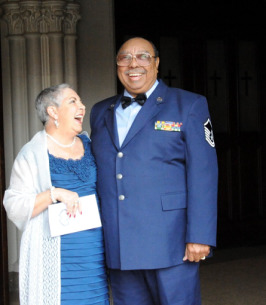 Print
Lem Phillips, of Manteca, Ca., passed away peacefully surrounded by his family on February 10, 2022. He was 84 years old.
Lem was born on December 2, 1937, to Mary and Ocie Phillips, in Roanoke Alabama.
While in high school, Lem held many jobs working in the fields picking cotton and turnips, working in the local hospital as an orderly, and chopping wood for a local lumber company. He was also a man of many talents and sang in a trio on a local radio station, WELR, in Roanoke, Alabama.
Knowing he wanted a better life, Lem enlisted in the United States Air Force in 1954. While serving in the Unites States Air Force in Zaragoza, Spain, he met the love of his life, Maria Josefina Orradre Phillips. Married for 61 years, they raised four children and lived in several military installations, including Zaragoza Air Base and Torrejon AFB in Spain, Ellsworth AFT, South Dakota, Watertown AFB, New York and Almaden Air Force Base, Los Gatos, Ca. After serving a 23 year career in the United States Air Force, Lem retired as a Master Sergeant and began a second career at Lockheed Martin in Sunnyvale, CA for another 25 years. Lem was also an entrepreneur, starting his own trucking business (Phillips Trucking) hauling produce and various other commodities throughout California and nearby states. He also held many odd jobs to make sure his family had what they needed.
Lem was a devoted father to his children, a beloved husband to his wife, Maria and a doting Yayo to his grandchildren. He loved to take his family camping and sightseeing throughout the countryside in Spain, and California. He was deeply invested in the upbringing of his grandchildren and attended school events, performances and sports events. He cherished family dinners with his wife, children and grandchildren, sharing funny stories and memories of a life well lived.
Lem was preceeded in death by his two sons, Sergio Javier and Gregorio Ignacio Phillips. He is survived by his wife Maria, three daughters, Belisa (Raimon) Miller, Ana Phillips (Rob Hall) and Vanessa (Daniel) Harris Jr., grandchildren, sisters and brothers and numerous nieces and nephews.
A memorial service will be held at Colonial Rose Chapel, in Stockton, CA on Saturday, March 12, 2022, at 10:00 am. Internment with Military Honors will immediately follow at Cherokee Memorial Park, in Lodi, Ca with a celebration of life at Del Webb Woodbridge in Manteca, Ca.

To send flowers to the family of Lem Phillips, please visit our Heartfelt Sympathies Store.

We encourage you to share any memorable photos or stories about Lem. All tributes placed on and purchased through this memorial website will remain on in perpetuity for future generations.

JoAnn and Frank Cope and Sincerely, Ruben Moreno and Family sent flowers to the family of Lem Phillips.
Send Flowers

Please accept our most heartfelt sympathies for your loss... Our thoughts are with you and your family during this difficult time.
JoAnn and Frank Cope - Thursday March 10, 2022 via Heartfelt Sympathies | Order flowers in memory of Lem
Share This:

Please accept our most heartfelt sympathies for your loss... Our thoughts are with you and your family during this difficult time.
Sincerely, Ruben Moreno and Family - Friday March 04, 2022 via Heartfelt Sympathies | Order flowers in memory of Lem
Share This:
1
Page 1 of 1
Share
×