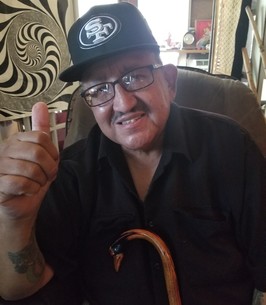 Print
It is with a heavy heart and much reluctance that we must announce the passing of beloved, respected, and admired James Aguilar. He passed away peacefully during the early morning hours of Friday February 5th, 2021. He is preceded in death by his mother Rose Gonzalez Aguilar. He leaves behind his wife Damita Aguilar of 35 years, his eldest son James Aguilar, daughter and son in law Katharine and DeVon Cook, and youngest son Roman, He is also survived through his 3 grandsons DeVon Cook Jr, Isaiah Aguilar, and Luke Cook, they will miss their loving Papa dearly, And also his father James Aguilar.
James graduated from Franklin High School in 1969. He took a year off to assist in a vet clinic; he was also a talented pet groomer. He attended Delta College, San Diego State University, then returned home to Stockton where he eventually graduated from the University of the Pacific in 1977. At this time he was already employed by San Joaquin County at the Juvenile Detention Center, until he was promoted to probation officer. He would continue to move through the ranks until he reached the position of Probation Unit Supervisor on February 2, 2002 which is where he would stay until his retirement in March of 2004.
Throughout his more than 25 years of service to the community he would organize events for minors on probation, facilitate parenting classes, and overall become a positive influence and mentor to many, he would offer guidance and friendship. Later, years into his retirement these young people he had impacted would come visit with their families to tell him how he helped to put them on a positive path for life. Over the years he would become a godparent, uncle, and father figure to those who needed him.
His unique humor and perspective on the world held no parallel. Jim, as he was often referred as, would consistently make any room a happier one by being in it. He is deeply missed. Family intends on having a celebration of life when conditions concerning Covid are safer.

To send flowers to the family of James Arthur Aguilar, please visit our Heartfelt Sympathies Store.

We encourage you to share any memorable photos or stories about James. All tributes placed on and purchased through this memorial website will remain on in perpetuity for future generations.

Provide comfort for the family of James Arthur Aguilar by sending flowers.
Send Flowers
next page >>
Page 1 of 0
Share
×