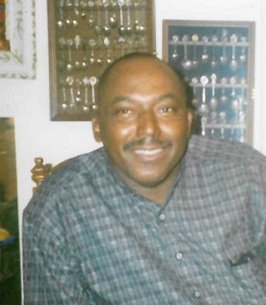 Print
On November 4, 1946, in Winston-Salem, NC, William Rogers was born to Johnny Boston Scippio and Gertrude Henry Scippio. He was the second of six children the couple welcomed into the world. Rogers was inquisitive and imaginative, constantly discovering how things worked, making friends, observing, and talking about people, places, and things he encountered. In his youth, he spent many hours at his Uncle Willie’s store listening to the older men chat and observing the comings and goings of the various customers while benefiting from the cookies and candy Uncle would give him. When he was not at the store he would be at the Skyland Recreation Center, swimming and playing table games and sports. His spiritual foundations were at Grace Presbyterian Church. This included fond memories of walking to Granddaddy Scippio’s house and having Ms. Curt’s fresh baked pie. Rogers attended St. Benedict’s Catholic School, Skyland Elementary School and Atkins High School. He retired from East Bay Municipal Utility District in Oakland, CA.
Rogers believed in supporting his family with his physical presence. Those who lived in NC would anxiously await his arrival on his many road trips. When he arrived, it was as if sunshine had walked in. When his brothers, Kent and Rondy, and Cousin Bobby Durrah thought they wanted to relocate to California, Rogers and Novis were generous with their hospitality, housing them beyond days to months.
Rogers loved to cook. He was the chef for a catering business with Rondy and friends Mark Britton and Anthony Neal. His ribs, tri-tip, chicken, and garlic mashed potatoes were legendary. His other pastime was trips to Reno, Thunder Valley and Jackson that were signals that he was feeling good. When his sister, Annette, relocated to California, she and Rogers frequently spent weekends in Reno sharing each other’s time. It was therapy for them both. In recent months, his niece, Nikkya and nephews, Christopher and Rondy Michael, enjoyed the Reno experience with their Uncle Rogers. No matter where he went, Rogers made friends who connected with him. There were his bingo buddies, his Reno gaming friends, his friends at the baseball park, his childhood friends from school and the recreation center, and his East Bay MUD friends. His broad smile was infectious and endeared him to so many.
Rogers was married to the love of his life, Novis Stapler Scippio, for 48 years,. He cherished their children Chevella Gaston, Michelene (Cedric) Nicholas, Aleshia Scippio-Woodcock, William Scippio Jr., Leala Scippio, Marcus Scippio, and Therrington (Shari) Scippio. He always made a way to visit them wherever they were living, in North Carolina, Georgia, Mississippi or Kentucky.
Rogers was a proud grandfather who kept count of his growing tribe. He loved and cared about each grandchild---Andrew Gaston, Leah Gaston, David Lewis, special affection for Darren White, Mariah Villadores, Jenine Woodcock, Paris Woodcock, Parish Woodcock, Rashawn Barber, Chrishawn Barber, Yalani Scippio, Tamera Scippio, Marcus Scippio Jr., Caleb Scippio, William David Scippio, Nylah Scippio, and Isis Scippio. His great grandchildren--Karina White, Layla White, and Damiah McClendon--had a special place in his heart.
The bond of love among his siblings - Johnny Scippio Jr., Annette Scippio, Kent Scippio, Sr. and Rondy Scippio, Sr. - grew stronger as the Scippio children transformed to adults. Though he lived in California, Rogers often visited North Carolina to give his support and renew the bond of family love.
William Rogers Scippio will be fondly remembered by those he dearly loved along with a host of nieces, nephews, cousins, friends, and associates.
On December 26, 2021, in Stockton, CA, William Rogers Scippio went to heaven to be with God.

We encourage you to share any memorable photos or stories about William. All tributes placed on and purchased through this memorial website will remain on in perpetuity for future generations.

Monday January 03, 2022 via Heartfelt Sympathies | Order flowers in memory of William
Share This:

To the Scippio Family, Roger will be greatly missed much love and peace. Cedric &Micki
Cedric & Micki Nicholas - Sunday January 02, 2022 via Heartfelt Sympathies | Order flowers in memory of William
Share This:
RF
To the Scippio family ,
Sending our deepest Condolences
Joyce Flournoy -Bryant
Rita Flournoy - Wednesday December 29, 2021 via Condolence Message
Share This:
RF
In Your Time of Loss
May my words of sympathy and understanding
bring you comfort in the loss of your loved one .
My deepest condolences , Rita Flournoy
Rita Flournoy - Tuesday December 28, 2021 via Condolence Message
Share This:
1
Page 1 of 1
Share
×