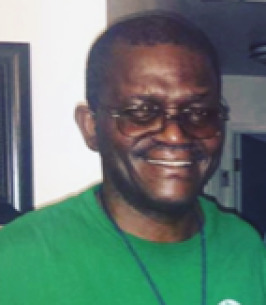 Share this tribute
Memorial Candles Lit for Leroy | SEE ALL
Light a Candle
"We are honored to provide this Book of Memories to the family."
— Colonial Rose Chapel & Cremation
"My deepest condolences to the Deed Family I pray for comfort and healing for the family Leroy was a gentle loving Man that will be truly..."
— Cynthia Shannon
"Another Angel Gained His Wings My Deepest condolences goes out to the immediate family Leroy was a Big brother and mentor for me he was..."
— Cynthia Shannon Harrell
Funeral Details Memory Wall Photos & Videos Send Flowers

Leroy Deed was born to the proud parents of Pauline and Willie Deed Jr. on July 6, 1956 in French Camp California. Leroy was raised in Stockton California where he attended various schools. He graduated from Thomas Edison Senior High School in June of 1974 and joined the U.S. Army a month later. He served his country proudly while stationed in Neu-Ulm Germany as Cannoneer in a Field Artillery Battalion and received an Honorable Discharge. Upon leaving the military he returned to Stockton working at various jobs until 1997 when he decided to move to Phoenix Arizona where he lived for 22 years. Although he lived in Arizona, he always considered California his earthy home.
On August 31st 2019 he moved back to his birth state. Leroy loved the lord and read his bible frequently. He also loved his family and to cook, play the piano, watch sports, and most of all he loved his only child Trevar. He was also a trained boxer and had an amateur boxing record of 18 wins and 1 loss. During his boxing days he was called “Leroy Lay em Down Deed”, because all his victories ended with his opponent unable to get up off the canvas due to his tremendous knockout power. For years our brother suffered with several serious medical conditions but he fought a gallant battle to remain among us, but as his body started to deteriorate, he became weary. On August 8, 2020, in the early morning as he laid in his bed, he closed his eyes and took his last breath and God called him to his heavenly home.
Leroy is preceded in death by his parents and his sister Tina Rochelle Deed-Guy. Our Brother leaves to cherish his memories of a full and well spent life. Leroy is survived by his only child; Trevar A. Deed of Phoenix Az., Four Brothers: Willie Deed III of Suisun CA., Michael A. Deed of Stockton CA., Algerey McKinley of Sacramento, CA., Justin M. Deed of Sacramento CA. Eight Sisters: Charlsa McKinley of Sacramento CA., Marilyn Mc Kinley of Sacramento CA., Manndie Evans of Sacramento, CA., Sylvia D. Deed of Stockton CA., Georgia J. Robertson of Concord CA., Irene Lutin of Sacramento, CA., Dianna F. Deed of Sacramento CA., Renee Williams of Sacramento, CA. Two sisters in Laws: Margit C. Deed of Fairfield CA., Nicole Deed of Sacramento CA. Two Brother in Laws: Eric Lutin of Sacramento CA., Timothy York of Sacramento, CA. and a host of relatives and friends. We love and miss you Leroy. You will forever be in our hearts and minds. Good-Bye for now, one day we shall meet again in the kingdom of the lord.

To send flowers to the family of Leroy Deed, please visit our Heartfelt Sympathies Store.

We encourage you to share any memorable photos or stories about Leroy. All tributes placed on and purchased through this memorial website will remain on in perpetuity for future generations.

Add Photos Post Condolence
AG
I was your driver at Owl Transportation in Phoenix and I will never forget our endless conversations about boxing and life itself. You were a good man. Rest in Power, Brother 🥊🥊
Antonio Goss-Ivory - Tuesday September 01, 2020 via Condolence Message
Share This:

My deepest condolences to the Deed Family I pray for comfort and healing for the family Leroy was a gentle loving Man that will be truly missed🙏🏾
Cynthia Shannon - Friday August 28, 2020 via Memorial Candle
Share This:

Another Angel Gained His Wings My Deepest condolences goes out to the immediate family Leroy was a Big brother and mentor for me he was the best brother in law anyone could ever ask for the love he gave my sister Gloria unconditionally I will always keep the memories close to my heart ❤️ I pray for comfort for the family The love Leroy Had for his Son Trevar You will truly be missed Leroy Sweet Daddy Black forever in my heart
Cynthia Shannon Harrell - Saturday August 22, 2020 via Memorial Candle
Share This:
1
Page 1 of 1
Share
×