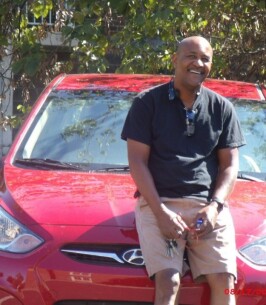 Print
Ledon Tyrone Brown (also called Tony or Lee) was born to the parents of Ellis Bernard Brown and
Katherine Brown on January 1, 1961, at Presbyterian Hospital in San Francisco, California. Tony was the
middle of six children, Ellis Bernard Brown Sr, Patricia Ann Brown, Robert Lewis Brown, Linda Louise
Brown and Iola Marie Brown. Tony attended Faragout Elementary, Aptos Jr. High and Galileo High
School. Tony loved building model cars and fire trucks. While still young, Tony was introduced to many
of his friends that are still his friends today but two became his brothers, Darren Calhoun, and Rodney
Bowden (also called Pee Wee) whom Tony loved dearly. Tony always had a love for driving, Reggae, and maintenance which became his Joy. Each would shape the course of his life in a major way. In his early twenties, Tony fell in love with the reggae culture. He grew dreads and would wear a crochet tam with the Jamaican colors on it and speak with a Jamaican accent. I can't tell you when Tony’s love for music began. All I know is I can’t remember a time when it wasn’t part of his life. He would sit and listen to his albums for hours from rock to soul, to reggae. If it had a beat, he knew it. He could tell you any song and who it was by regardless of the era. While working one day he was introduced to a young lady named Troye Smith who later becomes the
mother to his only daughter Jahna Smith-Brown. Her arrival on August 3, 1984, brought so much joy to
his life. From her tackling eating noodles which started with a handful to only one getting into her
mouth to his sitting and playing the song “You’re a big girl now no more daddy’s little girl.” All the time
saying that’s my song to my daughter as she got older. On February 24,2005, Jahna gave birth to a son
Anthony Espinoza which made Tony a proud grandpa. By the 80’s, Tony had already begun doing maintenance. He could fix anything and was also good with cars. He was never without his tool belt, so we (his family) gave him the nickname Overton from the maintenance guy on the show Living Single. His keys always hung from his belt while jiggling as he walked. Through the early 80s to the early 00s Tony became an uncle to Raquel Brown, Danyaha Brown, Dominique Brown, Nichole Brown, Joseph Buggs, Jr., Norel Knowles and Infiniti Brown. Tony
was known for his root beer float which the kids loved. He also could cook a mean roasted chicken
w/rosemary, all the time blasting his music in the kitchen singing and dancing as he cooked. After the passing of our mother in the late 90’s, Tony decided to move to Arizona where he worked in
maintenance for a while. After some years he enrolled in Truck Driving School. Tony loved driving his
truck with his dog beside him. Eventually, Tony would leave Arizona and move to Hutchinson, Kansas.
Tony was known as Lee to his Kansas family. He brought a house and would shelter stray dogs for any
agency that needed a place for them. He drove 18 wheelers and gas tanker trucks. He drove across the
country from Kansas to New York and back to California in all types of weather. If it had wheels, he
didn’t mind driving it. Tony also met the love of his life in Kansas when he met Sherry Donohue. Tony and Sherry met when Tony was doing maintenance at a Senior Facility where Sherry worked. Tony became a close part of her family. Although Tony lived in Kansas for many years, he began to become homesick. Missing the Bay
Area, He decided to move back home where he took up residency in Stockton, California in 2020. He
became head of maintenance for two Marriot Hotels where he worked until he became ill. Although one part of his life has ended with us, he continues to live on with his family and friend who has taken this journey before him. Ledon Brown leaves behind a daughter Jahna Smith-Brown, grandson Anthony Espinoza; one brother Robert Brown; two sisters Linda and Iola Brown; five nieces, Raquel Brown, Danyaha Brown, Dominique Brown, Nicole Brown, and Infiniti Brown; two Nephews Joseph Buggs Jr. and Norel Knowles; three great nephews Daveon Soriano, Dominic Brown, and Truth Bingham; Darren and Vera Calhoun, Rodney Bowden, and many cousins and friends who will all carry a piece of him in our hearts until we see him again.

To send flowers to the family of Tony Brown, please visit our Heartfelt Sympathies Store.

We encourage you to share any memorable photos or stories about Ledon. All tributes placed on and purchased through this memorial website will remain on in perpetuity for future generations.

Provide comfort for the family of Tony Brown by sending flowers.
Send Flowers
next page >>
Page 1 of 0
Share
×