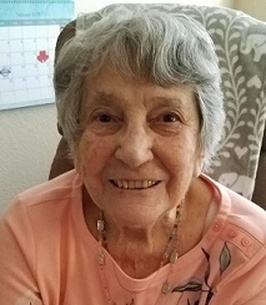 Katalin Horvath- 95 years well lived. Born in Szentendre, Hungary, to the local postmaster Istvan Kuhn, and Olga Doufrain, she grew up close to the shore of the Danube River. Preceded in death by her beloved parents, brother Istvan (Pista), and sister Zsuzsanna, she is survived by her youngest sister Gizella (Gizu), who still lovingly refers to her as kis mama (little mother). Always a devout Catholic, she nearly entered the convent, but her love for her childhood sweetheart and her fervent desire for motherhood led her to marriage and family. In 1944 she married Tibor Horvath, a chemical engineer, and became a teacher. Their activism in the resistance to Russian control of Hungary (he was a prominent leader in the Hungarian Revolution of 1956 and she clandestinely taught catechism) made it too dangerous for them to remain in their homeland. Walking through the snow in the middle of the night with their four small children, on December 22, 1956, they escaped to freedom by crossing the border into Austria. They were granted refugee status and entered the USA through Camp Kilmer, NJ. As a chemical engineer, Tibor soon found work with Merck and Co. and the family began their American dream in Linden, NJ. A work transfer brought them to California, where they had their fifth child and made their home for the rest of their lives. In 1963 they moved to Stockton where they were members of Presentation Parish and often played bridge and hosted bridge parties in their home. She earned her teaching credential and taught the Headstart program at Nightingale School in Stockton. Teaching was her true vocation. She had a deep love and understanding for young children and mentored many young educators. She became a professor of early childhood education at a community college in Fresno. Later, in El Cerrito, she continued teaching preschool as well as many other activities such as teaching Hungarian cooking classes and volunteering for Catholic Charities. As a third order Franciscan, she found peace at San Damiano Retreat Center, her spiritual home, where she attended many retreats throughout the years. Returning to Stockton after retiring in 1985, she turned her attention to her many grandchildren, hosting them at Grandma’s house, taking them on camping trips, and showering them with that special love and attention she had given her children and students over the years. Tibor and Katalin moved to O’Connor Woods in 1998, first to a cottage, then to an apartment after her husband’s death in 2004, and finally to assisted living in Garden Oaks in 2017. The family gathered for countless pool parties, birthday celebrations, graduations and anniversaries. Tibor’s funeral Mass was held in the chapel, also the site of the 1994 50th wedding anniversary renewal of their vows. She was known for her green thumb and the incredible gardens she grew everywhere she lived. She was courageous, funny, smart, unfailingly kind and loving. She touched countless lives throughout her time on earth.
She is survived by her children Clara (Bernard), Tibor (Diana), Kathy Barrere, Julie Stephens (David), and Maria/Marchi Miller (Bill); her grandchildren Sean (Shirley), Gretchen (John), Howard, Peter (Maxine), Christine (Josh), Jim (Christy), Laurie (Jon), Andrea, Forest, and William; her great grandchildren Kharyssa (Will), Morgann (Trey), Brooke (Tim), Sydnee (Damon), Jake, Dylan, Amy, Jonah, Mia, Katie, Abigail, Lucas, Kody, Christian, Peter, Kennedy; great great grandchildren - Aaliyah, Carter, Dallas, Everlee, Bridger, Kai.
The family gives special thanks to the staff at Garden Oaks and Hospice of San Joaquin.
No services currently due to COVID. When the pandemic is over, we will have a memorial Mass and Celebration of her Beautiful Life.

To send flowers to the family of Katalin Horvath, please visit our Heartfelt Sympathies Store.

We encourage you to share any memorable photos or stories about Katalin. All tributes placed on and purchased through this memorial website will remain on in perpetuity for future generations.

Provide comfort for the family of Katalin Horvath by sending flowers.
Send Flowers
next page >>
Page 1 of 0
Share
×