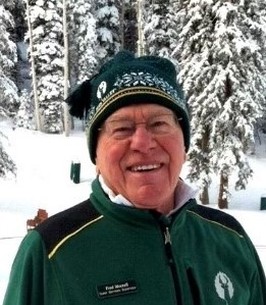 Share this tribute
Memorial Candles Lit for Joseph | SEE ALL
Light a Candle
"Fred will truly be missed. He always brought a smile to my face when I saw him. Peace to all of his family and friends. "
— Samie Gonda
Funeral Details Memory Wall Photos & Videos Send Flowers

In loving memory of Fred Morrell who died on Monday October 25, 2021 in Stockton, CA.

Fred was born in Moundsville WV, to Joseph and Margaret (Carothers) Morrell on September 20, 1935. He grew up there with his sisters Darlene and Arlene and brother John. Grandma Morrell and her faith had a great influence throughout his life.

He enlisted in the navy after graduating from high school and proudly served for three years. Following his military service Fred earned his bachelor’s in business administration at West Liberty University in WV and later earned a master’s degree from West Virginia University in psychology. Throughout his life Fred wore many different hats: school teacher/counselor/coach, director of training and development for the coal industry, employee team building facilitator for the space industry and guest services manager for the ski industry, just to name a few.

Wherever Fred was, he connected with people and made significant and lasting friendships. He loved to laugh and joke and make people smile. As one friend said, “he knew how to live!” Another friend said, “everyone Fred knew truly appreciated him for who he was and what he stood for: fairness, respect, and kindness… he learned so much from his grandma…”

Some of Fred’s favorite things were biking, skiing, hiking & exercising with family and friends, listening to Jazz and eating cookies! He received joy and satisfaction when he knew his kids, grandchildren and great grandchildren were able to get together and connect. He will be greatly missed by friends and by his family.

In lieu of donations to a favorite charity, we ask that you honor Fred by acting charitable to those you are close to and those you meet along the way.

To send flowers to the family of Joseph Fredrick Morrell, please visit our Heartfelt Sympathies Store.

We encourage you to share any memorable photos or stories about Joseph. All tributes placed on and purchased through this memorial website will remain on in perpetuity for future generations.

Fred will truly be missed. He always brought a smile to my face when I saw him. Peace to all of his family and friends.
Samie Gonda - Friday October 29, 2021 via Memorial Candle
Share This:
1
Page 1 of 1
Share
×