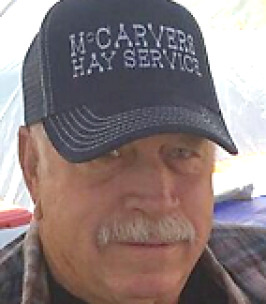 Jim was born in Tupelo Mississippi on November 28, 1938 at his grandmother's home. He grew up in Sledge and Crenshaw Mississippi. His parents took on many roles and jobs, owning their own plot of land. In 1956 the entire McCarver clan chose to uproot their humble life and move to California. Jim worked with his father for a rancher (George Morris) farming land. Jim then married his first wife Mary Wilhite in 1960 at the age of 20. He then took a break from farming to construct tunnels alongside his brother’s Robert “Bob” Lee McCarver (now deceased) and Otis Ray McCarver. After the tunnel jobs, he became a car salesman in 1972 where he excelled. Needing a change in his working career, he then decided to go back to his roots and become a hay farmer in the 90’s; slowly transitioning from the business of cars into a full time farmer. During this transitional period he met his second and final wife Sandra “Sandy” Parks in 1994.

Jim was married to Sandy on June 25, 2000 and were married for 20 years (total 26 years). Together they bought a plot of land in Linden and built the ranch of his dreams. This property transformed before his eyes into a place of love and relaxation, as well as a place of business for his hay sales.

Jim was a jack of all trades. But only his closest family know him for his artistic side. He loved to create bird houses, bird baths, iron horseshoe art, etc. Jim had the gift of imagination and turned his dreams into reality. He could make you laugh and at the same make you feel important and loved.

We encourage you to share any memorable photos or stories about James "Jim". All tributes placed on and purchased through this memorial website will remain on in perpetuity for future generations.

harold mccarver sorry for the families loss a great man who i loved and a great cuz rest in piece Jimbo - Friday June 26, 2020 via Memorial Candle
Share This:
1
Page 1 of 1
Share
×