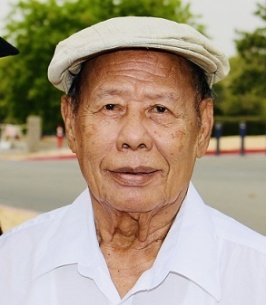 Share this tribute
Memorial Candles Lit for Ignacio | SEE ALL
Light a Candle
"We are honored to provide this Book of Memories to the family."
— Colonial Rose Chapel & Cremation
"We love you Lolo Latoy. You are now one of our angels up in heaven. Watch over us. "
— Joevie, Johnmar, Marvie John, Alex
Funeral Details Memory Wall Photos & Videos Send Flowers

Latoy was born on February 2, 1926 in Catmon, Cebu, Philippines. He served in the United States Army during World War II as a Military Police. After serving in the Military he went straight to college and received a degree in Law from University of Cebu. He also served as Barangay Captain for several years in Macaas, Catmon, Cebu. He worked as a Sheriff for over 40 years at Regional Trial Court in Cebu, Philippines. After his retirement, he migrated to Stockton, CA in early 1990’s and volunteered for several years at YMCA as a tutor and was a member of St. Mary’s Catholic Church choir.

Latoy enjoyed playing chess, dancing, singing, and fishing. He will be forever remembered for his outgoing personality, infectious smile, and his eagerness to help others.

He is preceded in death by his parents, Estanislao Orlanes and Julia Durano-Orlanes, his children, Rabbi Orlanes, Ignacio Orlanes Jr., and Joey Orlanes of Cebu, Philippines.

To send flowers to the family of Ignacio Durano Orlanes, please visit our Heartfelt Sympathies Store.

We encourage you to share any memorable photos or stories about Ignacio. All tributes placed on and purchased through this memorial website will remain on in perpetuity for future generations.

We love you Lolo Latoy. You are now one of our angels up in heaven. Watch over us.
Joevie, Johnmar, Marvie John, Alex - Friday September 04, 2020 via Memorial Candle
Share This:
SO
I hope u are happy where you are right now papa latoy... Ty for everything even tho we didnt spend much time together... Rest in peace papa... Luv u alwayss 💖💖
Samarah Orlanes - Thursday September 03, 2020 via Condolence Message
Share This:
SO
Rest in peace papa latoy.
Thank you because of you we have the best dad, daddy ones. we love you💖
Love ping²
Sophia Orlanes - Thursday September 03, 2020 via Condolence Message
Share This:
GO
Rest In Peace Papa Latoy.
Know that we love you and it will stays forever in our hearts.
Pa, this is not the end but its the beginning of your new journey in life in our real resting place in heaven with our Almighty Father.
Thank you for without you I don't have ONES in my life with our kids Samarah, Sophia and Shania.
Please continue to watch over us your children and grand children.
Your Daughter in Law,
Grace
Grace Orlanes - Thursday September 03, 2020 via Condolence Message