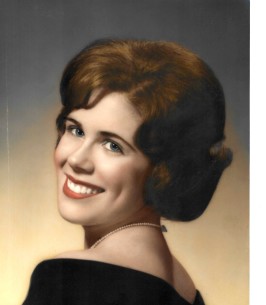 Print
Diane was born in San Francisco, where she graduated from St. Paul's Catholic High School before studying chemistry and literature at Lone Mountain College. She married Clayton in 1965, and had two children, Theresa, and Michael.
She worked at James Allan & Sons in San Francisco with her husband, Clay, and moved to Stockton in 1974, when the company transferred. She began working at American Savings in 1984 as an insurance representative and remained with the company when they transitioned into Washington Mutual, continuing on as project manager until her retirement in 2007.
Diane's many hobbies included ceramics, painting, drawing, sewing, embroidery, cooking and cake decorating. She loved to spoil her dogs. She was huge Disney fan and enjoyed many trips to Disneyland with her family.
Diane was a parishioner at Presentation Catholic Church, where she and Clay put in several years of volunteer work, including bringing Bingo back as a popular fundraiser. She was involved with Clay in the Lodi/Tokay Band Boosters and worked for several years on the Lodi/Tokay Band Review.
She is survived by her children, Theresa and Michael Warde, her grandchildren, Conor Warde and Kathleen Diezel, and her great-grandson John Warde.
Diane was a loving mother, grandmother, great grandmother and friend who will be missed, but never forgotten

To send flowers to the family of Diane Joan Warde, please visit our Heartfelt Sympathies Store.

We encourage you to share any memorable photos or stories about Diane. All tributes placed on and purchased through this memorial website will remain on in perpetuity for future generations.

Provide comfort for the family of Diane Joan Warde by sending flowers.
Send Flowers
BO
I have been a neighbor and friend of Diane (Warde family) for over 45 years. In our younger days we had cul-de-sac parties, playing games and of course eating. Sometimes we had potlucks and other time BBQ's. We would play Trivia games and Diane and her husband Clay were always the winners. Some very enjoyable times. Rest in Peace Diane, you are missed. Bette Outlaw
Bette Outlaw - Saturday February 26, 2022 via Condolence Message
Share This:
1
Page 1 of 1
Share
×