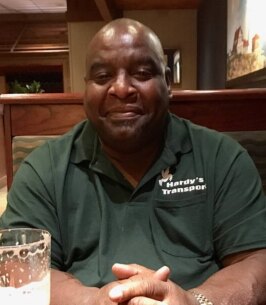 Share this tribute
Memorial Candles Lit for Derrick | SEE ALL
Light a Candle
"We are honored to provide this Book of Memories to the family."
— Colonial Rose Chapel & Cremation
"You were a great Dad, I wish I told you that while you were here. I love u very much. You will be missed by a lot of people Mr.Hardy. Thank..."
— His daughter Shawnta Nicole Hardy
Funeral Details Memory Wall Photos & Videos Send Flowers

Print
Psalms 30:5 “weeping may endure for a night, but joy cometh in the morning.”

Derrick Anthony Hardy, 61, went to his heavenly home on Monday, December 26th, 2022.
Born September 19th, 1961, in Paterson, New Jersey, Derrick radiated a strong energy of determinism and maintained a devout relationship with the Lord throughout his life.

As a natural born entrepreneur, Derrick set out to provide for his family and Hardy’s Carpet Cleaning became a household name in the early 80’s with ‘One call cleans them all.’ Over the years, however, he had a change in direction after surviving a kidney transplant himself and being blessed with a second chance at life; he then decided he wanted to be a direct servant of the Lord by giving back and spreading the word with Hardy’s Transport Services: a business dedicated to those in need to make it to their life-saving appointments he was so familiar with. Throughout his life, Derrick has been a beacon of light and blessing to those he encountered. A successful business owner and Father, die-hard 49er fan, avid fisherman, and gumbo connoisseur, Derrick will be sorely missed.

Derrick was preceded in death by his father Henry Hardy, brothers Kereshawn and Maquis Hardy, and best friend Bradley Kemp.

To send flowers to the family of Derrick Anthony Hardy, please visit our Heartfelt Sympathies Store.

We encourage you to share any memorable photos or stories about Derrick. All tributes placed on and purchased through this memorial website will remain on in perpetuity for future generations.

Add Photos Post Condolence
TR
My sincere condolences to the family. I only knew Mr. Hardy for a few months as I worked with him but he taught me a lot and always provided a word from the Lord for me. Always encouraged me. He passed away so sudden and it definitely broke a lot of hearts. I will remember you always Mr. Hardy. Rest in peace.
Tiffany Reza - Tuesday February 07, 2023 via Condolence Message
Share This:
JD
I would like to send my condolences to the Hardy Family and apologize for not being able to make it to the funeral. I'm still not physically able to spend a lot of time on my feet. I'm recovering from a 7 month stay in the hospital, I got out the 1st of June and Mr Hardy was there to welcome me home and me know not to worry about transportation I needed daily for my medication, but that he would also make sure I made it to any appointments. There was a few times that if I hadn't made it to an appointment I might to be here today. I was rushed to the ER twice. Thank God Mr Hardy had made sure I made it to my appointments and found I needed immediate care. I've known Derrick for years and have many stories of how his care for me saved my life. Derrick was a good man who will be missed by many. God bless you Mr. Hardy for all you've done I will miss you so much. Joni
Joni Davidson - Wednesday January 11, 2023 via Condolence Message
Share This:

You were a great Dad, I wish I told you that while you were here. I love u very much. You will be missed by a lot of people Mr.Hardy. Thank you for everything you taught me.
His daughter Shawnta Nicole Hardy - Friday January 06, 2023 via Memorial Candle
Share This:
1
Page 1 of 1
Share
×