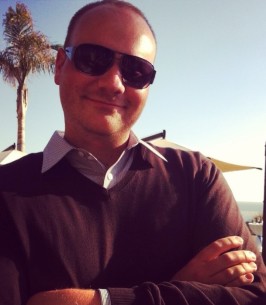 Print
Brian Smith Newlin passed away on March 22, 2021 after a short illness. He was born in Salem, Ohio on July 6, 1984 to Neal and Sharon Newlin. He was preceded in death by his father Neal and his sister Jessie.
His family moved to Stockton before his first birthday, so as far as he was concerned, he was a native Californian. He attended Oakwood Elementary School, Delta Sierra Middle School and Bear Creek High School. He spent two years at San Diego State before starting his career in Food Service at Starbucks. He spent some time at Twitter and Bon Appetit before landing his dream job at Workday. He got to be involved in the planning of two employee cafes, which gave him great satisfaction.
Brian was a smart, funny, thoughtful and caring person. He was easy to talk to and a great listener. He had many friends and co-workers who will miss him greatly. He was always ready with a big smile, a helping hand and a can-do attitude. He did not suffer fools gladly, but was there if you needed help.
After losing his sister to brain cancer, and watching his grandma suffer through chemo treatments for breast cancer, he became involved with the American Cancer Society’s Relay for Life. As a Starbucks manager he was able to help co-ordinate several events in Lodi and San Leandro. He was pleased to be in a position to help and do some good.
Brian leaves behind his mother Sharon, brother Zachary, sister-in-law Courtney and two adored nieces, as well as his two grandmas and many aunts, uncles, and cousins. Burial was private. A memorial/celebration of Brian’s life will be held at a later date.
Donations in Brian’s name may be made to the American Cancer Society/Relay for Life, the National Alliance on Mental Illness (NAMI), or the charity of your choice.
The family wishes to thank the many friends, relatives, neighbors, and even a few perfect strangers who have helped us through this sad time. We miss him.

To send flowers to the family of Brian Smith Newlin, please visit our Heartfelt Sympathies Store.

We encourage you to share any memorable photos or stories about Brian. All tributes placed on and purchased through this memorial website will remain on in perpetuity for future generations.

Dear Newlin Family, Our sincere condolences on your immense loss. Brian was truly loved. He was a part of my family and he will be missed. Rest easy.
Rizalyne, Frank, Edwin, and Sally Esguerra - Thursday July 08, 2021 via Heartfelt Sympathies | Order flowers in memory of Brian
Flowers were purchased and a memorial tree was planted
Share This:
RE
Two years ago exactly, on Brian's birthday, he came down to visit me. We used to be roommates during our SDSU days. He was a groomsman at our wedding and every time we went to Norcal, he was always on our list to visit. When he came for his bday, he was so excited to reminisce about our college and high school days. I loved this guy like a brother and can't believe he left this earth as soon as he did. You are dearly missed Brian, not only on your birthday but every time I hear the songs we used to jam out to, yours and mine. I loved how we were able to accept each other's differences and still find joy and embrace our uniqueness together. I will always cherish the sweet memories I have of us. A piece of you will forever be in my heart brother. We love you and you will live on in every memory. Thanks for being you and always being there when I needed you.
Rizalyne Esguerra - Tuesday July 06, 2021 via Condolence Message
Share This:
1
Page 1 of 1
Share
×