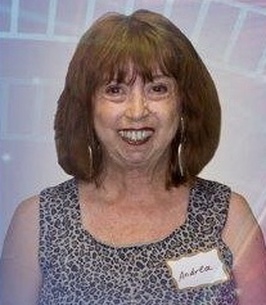 Print
Andrea Monika Savic Orgioli was born in Weiden, Bavaria on September 17, 1957 to Charlotte Erna Savic and Radojko Savic. She was raised and educated in Germany where she eventually trained as a dental technician. As a young adult, she moved to the the United States and embarked on a new journey. She settled in San Jose, California in the early 1980’s and began working for Avantek. She was an administrative assistant and was very capable but also took on the unofficial role of “social coordinator” planning parties and social gatherings for everyone. Avantek eventually was sold to Hewlitt Packard, where Andrea continued to work. In 1998, she married Joe Orgioli, a Navy Chief, and they were eventually transferred to Connecticut, where her son Benjamin was born. Benjamin quickly became the center of her world and light of her life.

In 2001, Andrea and Benjamin moved back to California, making their home in Stockton. Andrea was active in her community. She was the Neighborhood watch Captain for her area. She was a member of Quail Lakes Baptist Church, where she volunteered as a small group leader and, for many years, with the children’s program.

Andrea is survived by her son, Benjamin, and three sisters, Julika, Monica and Wera. Andrea made many friends along the way with her big heart and strong, sassy German persona. Andrea was a fighter with a great determination to beat Scleroderma. Always facing challenges with a positive attitude and love for the Lord. Andrea is one of the longest survivors of Systemic Scleroderma.
She will be dearly missed by Benjamin and many friends near and far whom she considered family.

We encourage you to share any memorable photos or stories about Andrea. All tributes placed on and purchased through this memorial website will remain on in perpetuity for future generations.

God Bless You Andrea
Joseph Orgioli and Family - Friday January 25, 2019 via Heartfelt Sympathies | Order flowers in memory of Andrea
Share This:
MP
To Andrea's family & friends,
I am so very sorry to read about your loss. May you find comfort in knowing that our heavenly Father truly loves you and cares about what you are going through. He will give you the strength needed to cope during this difficult time. 2 Corinthians 1:3,4
M Powell - Tuesday January 22, 2019 via Condolence Message
Share This:
1
Page 1 of 1
Share
×