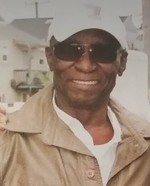 Alphonso was born July 22, 1932, in Wasco, Texas to Rudolf Abney and Rosie Singleton.
Al was the eldest of their two children. His family moved to California from Texas in the 1940’s. Soon after other family members also began migrating from Texas and Louisiana as well. He graduated from Encinal High School in 1950; shortly thereafter, he began working for Chrysler Motors. Then in 1953 met and married, Bobbie Foster (married 44 years) and they had six children together. General Motors was where he had a career for 32 years and retired in 1985. He had a passion for fishing, hunting, camping, playing dominoes, fixing on cars, and telling many stories about his life experiences.
Al was a native of the Bay Area for many years before moving to the Central Valley over 20+ years ago. He was a loving husband, father, grandfather, great-grand father, brother, son, uncle, friend, and a shoulder to lean on. Alphonso Abney, age 88, passed away peacefully on November 11, 2020 from COPD. He is proceeded in death by his wife Bobbie (Foster) Abney, son Gary D. Abney, mother Rosie MacDaniel, father Rudolf Abney and brother Rudolf Abney Jr, and they are waiting with open arms to greet him.